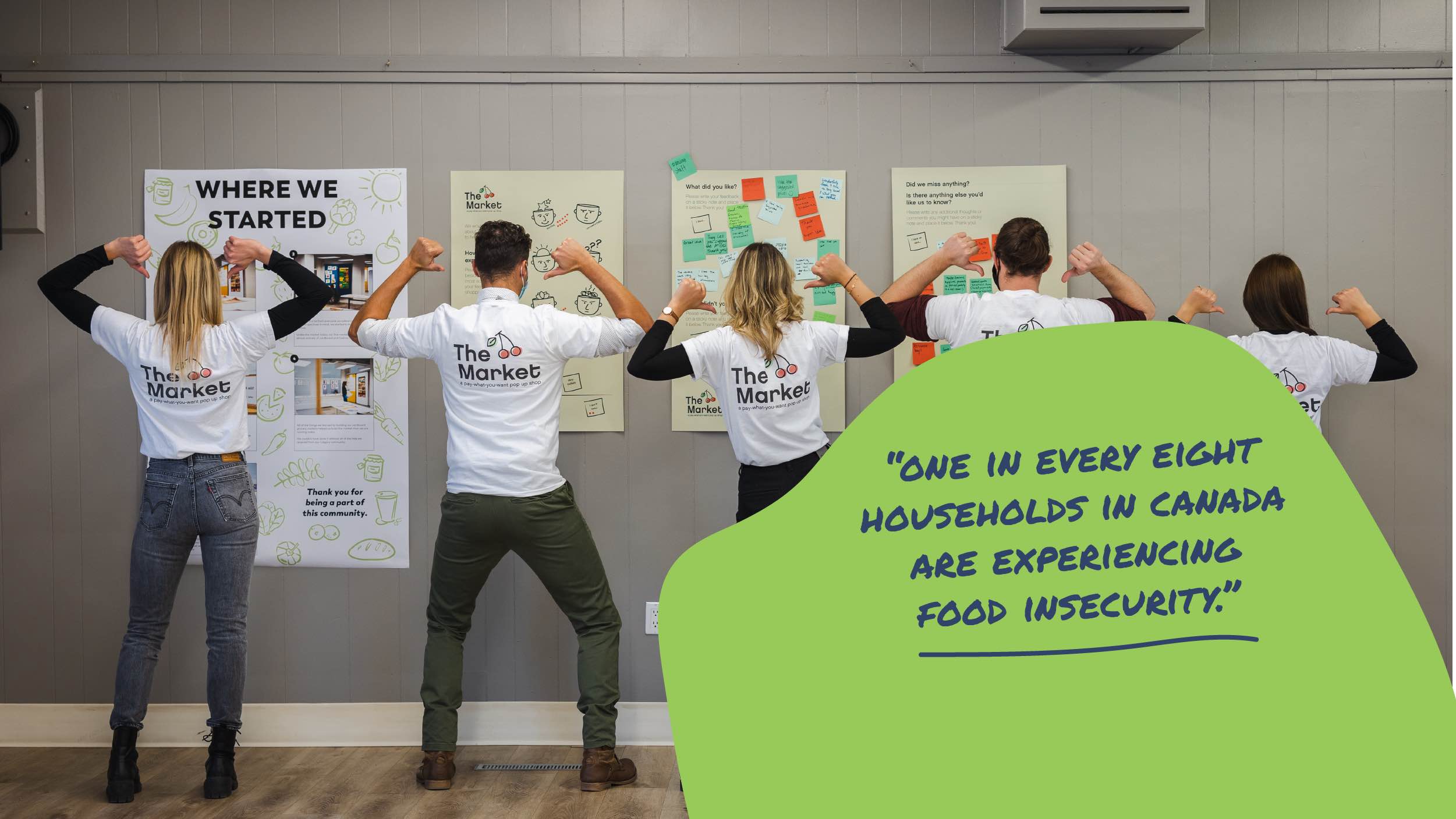 What do people who experience food insecurity look like? One of the major problems affecting food insecurity is visibility. Even those who have lived the battle of the food insecurity do not fully realize the prevalence of the issue in North American society. And why? Being downtrodden, not being able to provide for your family, or relying on others for stability aren’t proud moments. It is not something we talk about, and so, we continue to live a space of ‘we don’t know what we don’t know’.

Over the last couple years, The Social Impact Lab has been investigating this problem. “One of the things for me that really stood out is how many people in Calgary experience food insecurity. It is a massive number of people,” says Erika Mahoney, a Service Designer at The Social Impact Lab and team member working on the project. “One in every eight households in Canada are experiencing food insecurity.”

“People assume that individuals in their circles can’t be experiencing food insecurity, but it can be anybody,” says Erika. The common misconception that those experiencing food insecurity are a small segment of the population and are being addressed by existing services perpetuates the invisibility of this group. We might think that a family is doing fine because the kids have lunches at school, but at home a parent is skipping meals so their kids can eat, reluctant to ask for help because of a growing list of socioeconomic and emotional barriers. Perhaps this is also underlined by shame.

Food insecurity is experienced at varying degrees. We have been conditioned to jump to the visual of a person on the street, hands out in need. In reality, the everyday often looks more like a student unable to afford room, board, and tuition, who maps out food events on campus so they can eat.

This conditioning is often paired with thinking negatively of people in difficult situations: that it is their fault and help is available if they want it. Understanding that these issues are more complex and multifaceted is important if we are going to solve them.

Is a new Canadian escaping violence in their homeland at fault when they have trouble navigating a new culture and language? Is the person on the street begging for change to be blamed if untreated mental health issues started that journey? Is the person experiencing addiction solely culpable for the trauma that led them there?

It is much more convenient that the responsibility be theirs alone. If not, then the fault has to lie with a society that allows the vulnerable to slip through the cracks.

There is also a serious problem of access. Many people do not understand the supports available, how to access them, or whether they feel they can or should. For every one person experiencing food insecurity in Alberta who accesses a Food Bank, four do not. “Meaning, out of the large number of Calgarians experiencing food insecurity, many… are underserved or not served at all,” says Erika.

“Going into this project, my thought process was that there were all these resources and institutions to support these people,” Erika explains. The services that do exist, while well-intentioned, are often exhausted and limited, adding barriers where there should be none. While the popular assumption is that those in need only have to show up to be provided food, services often restrict access to a limited number of times a year and require a disclosure of personal financial information.

Many of those interviewed commented that the food they received was not up to the standard they would like to eat, a sentiment they don’t feel the right to voice, leaving them with poor quality or near expired food. Sometimes the foods provided are not culturally relevant to those receiving them either.

“What we’re trying to create is the opposite of that experience… in every way,’ says Sydney Johnson, the Design Lead at The Social Impact Lab.

After an exhaustive stint consulting experts, researching, and interviewing local Calgarians (on both sides of the affluence spectrum), The Social Impact Lab team narrowed their guiding principles down to dignity, access, and choice:

Problems like food insecurity don’t exist in a vacuum. They are multifaceted, often acting interchangeably as both symptom and cause. Like most things in life, there is momentum.

Do we expect self-worth and confidence from someone in an interview if they are struggling with the thought that their children might not have food in the morning?

It is this negative momentum that The Social Impact Lab addresses, rejecting the silver bullet for a guiding principle: it is time to start focusing on building people, and dignity is where we begin.

The Market – A Grocery Store Where You Pay What You Want

Since the idea was first conceived, the Social Impact Lab has been working towards developing a sustainable framework for a grocery store where you pay what you want.

The concept is simple: when given a chance, people want to help each other. This heart-warming sentiment came up over and over in The Social Impact Lab’s community interviews: the majority of people, when given the opportunity, would jump at the chance to help other members of their community. Additionally, those who need food support access overwhelmingly still want to contribute what they can, when they can.

What this means for the varying levels of the food insecure population is that no matter their financial status, they will always have access to the food of their choosing, without feeling judgement.

How would you stop people from taking advantage?

One of the main questions the team came up against was “How do you make sure people won’t take advantage?”. To that, Sydney responds, “We know from other examples of similar initiatives around the world, the more connected a community is, the less likely anyone is to take advantage of the concept. Therefore, something we are really focusing on in designing this experience is not only access to the food itself, but the community we build that surrounds the initiative.”

The Social Impact Lab is creating a solution built on empathy and a belief in humanity. What stood out for Erika is, “…people want to give back. People want to support their communities. They want to feel like they can help in whatever way they can.” Even those interviewed in extreme food insecurity wanted to find ways to give back by helping the store however they could. “The sense of fairness and the desire to help the community is something that comes out across the board.”

It is worth noting, during the first pop-up test of The Market concept, every vendor that participated made a small profit above their suggested price, and no one chose to pay nothing for their food.

The human-centered design process employed by The Social Impact Lab team began with a research and consultation phase, involving interviewing members of the Calgary community on both ends of the food security spectrum. A number of different concepts were thought through, initially leading to the building of a mock-store within The Social Impact Lab’s downtown space. Would-be patrons walked through, pretending to shop, and provided feedback on their experience. Feedback, iterate… feedback, iterate…

The next step – a more robust round of testing, running several pop-up markets over multiple days in different locations, that exchange actual money and products. The first was in Tuxedo Park, a demographically mixed community with some markers for food insecurity. The next will be in a downtown location, with an even more mixed demographic as well as an area classified as a ‘food desert’.

A simple example of something learned from these iterations of testing is that of pricing. Although the team thought that perhaps not displaying pricing would increase comfort among those shoppers intending to pay less, it was found that this wasn't true. Regardless of their payment behaviour, shoppers wanted to know suggested pricing to be able to make that decision accordingly.

The reason thoughtful and tested human-centered design is important is that it breaks down barriers for people. Things you wouldn’t expect to be important are illuminated: the placement of the cash register at the back of the store versus the front of the store, membership cards, and the role of a greeter all make a very real difference to shoppers.

The core of The Social Impact Lab’s consultative design process is put best by Erika, “I will never be as smart as we are.” Every person involved in the testing brought different and valuable perspectives. The consultative process also pointed to important aspects of the experience that affect the dignity of patron, like having range of selection and freshness of produce.

A strong tenet of the design is community. For The Social Impact Lab team, being integrated into the community is one of the most important factors in engagement. A contributing member of the team shared the ‘why’ of the focus on community connection best with a story from her personal life. For years, this person gave money to breast cancer organizations to do their part to honour the memory of their mother, who was tragically lost to the disease. It wasn’t until deciding to take part in a run for cancer that they truly connected to what it meant to be fighting the fight together. “For the first hundred meters I was okay. By the time I’d hit 300 meters, I had burst into tears.”

What is so important about the community connection is that those contributing to end food insecurity where they live are given a real connection to what they are supporting. One of the great things this store would do is help remove the division between us and them. Empathy is built in person.

With a modern, clean, and inviting design, it could look just like your local grocery store or market, but with the added bonus of knowing that your patronage has a much deeper meaning and purpose. Imagine doing your weekly shopping, pick up delicious meats and cheeses for a charcuterie board, or just running out to grab milk while the neighbor watches the kids.

The Social Impact Lab team has asked the hard questions about what it might take to address food insecurity locally. The reality is we succeed or fail together. Local food insecurity is merely a microcosm of what the world faces today. If we can learn to properly appreciate this truth, we can begin the long journey to solve our society’s greatest problems.