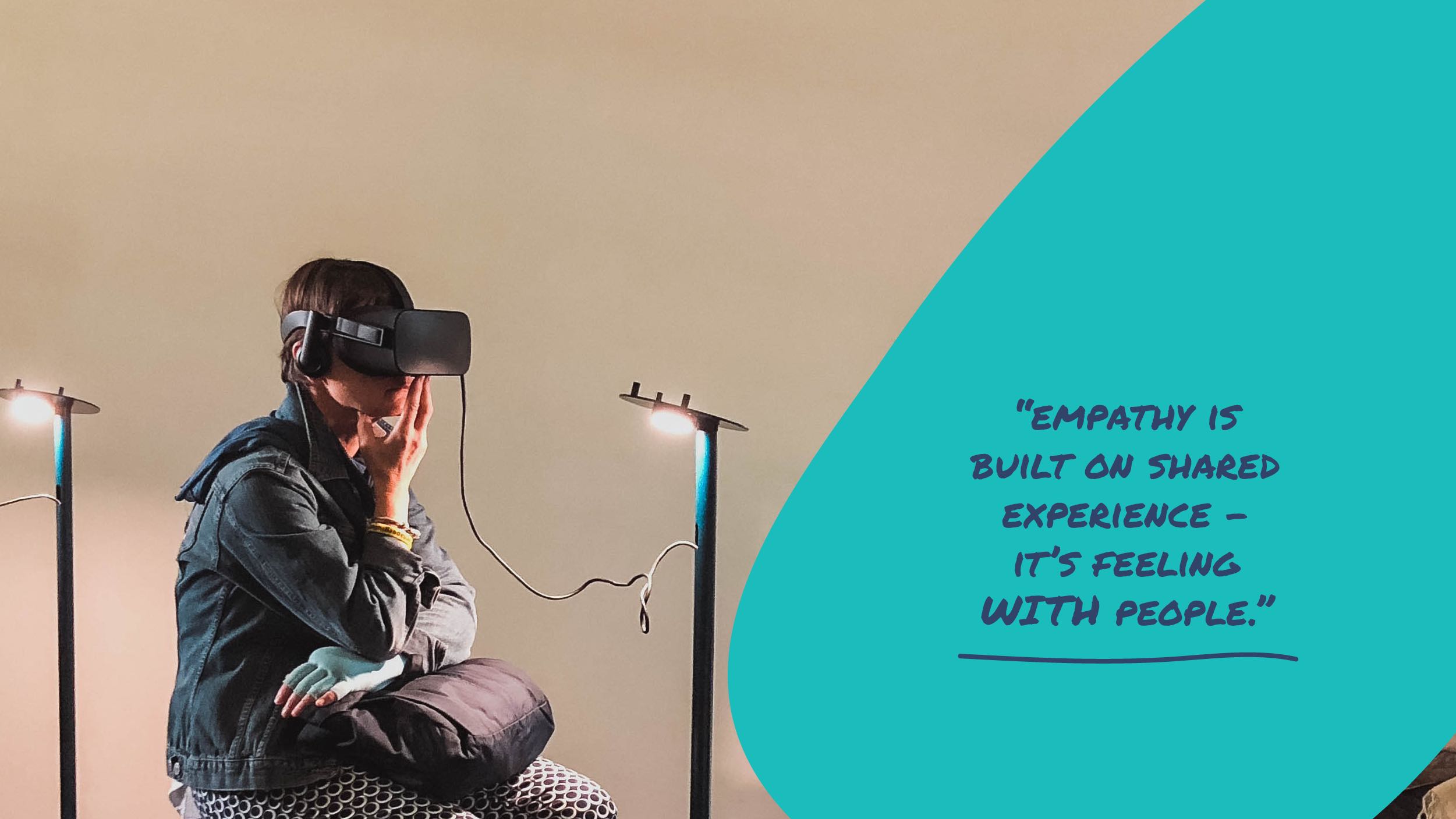 Can you generate powerful empathy through virtual reality? As it turns out, the answer is a resounding ‘Yes’! A couple years ago, members of the Social Impact Lab’s team were engaging with some corporate workgroups and the idea of generating empathy as a motivator for social action was tabled.

The question that evolved from that conversation - How do you connect people with an emotional understanding of what living in poverty feels like?

Flash forward to a Zoom window projecting the faces of social innovators, project managers, writers, audio engineers, and virtual reality designers and artists. A sense of ‘Let’s do it!’ in the air. Project Empathy commences…

You may be asking yourself - how does one create a virtual reality simulation about childhood poverty? Exactly the same question we asked ourselves. The answer, figuring it out as we go. After consulting with Dr. Rita Yembilah from the Canadian Poverty Institute to understand more deeply the intricacies of the issue we were about to take on, a team was assembled, including some great minds from Unity Technologies – a video game development company that created the Unity platform for virtual reality development.

Once the script was written and revised several times to fit the evolving digital environment, it was time to engage Beau Shiminsky, owner of EarCandy - ‘a Calgary-based audio boutique for sound and score built on a foundation of passion and creativity…and some say a modicum of madness!’

We were sent samples of voices selected from the character profiles we offered. Not knowing what to expect as the team, all in attendance, logged in and watched the voice actors begin, we were blown away as immediately the script came to life with anger, love, resignation, passion, and the uncertain lament of a 10-year-old boy who didn’t understand why life had become so dark… The voice actors chosen to play Jack (Felix de Sousa) and his parents (Anna Cummer and Tyrell Crews) brought the project up a level with their talent and professionalism.

As all the pieces slowly came together, the project began to take shape. Designing turned into testing – each member of the team donning an Oculus each time an updated version was pushed out, until there it was… BOOM! Jack’s Story was born!

According to popular researcher and storyteller, Dr. Brené Brown, there is a stark difference between sympathy and empathy.

Sympathy is a recognition of someone else’s circumstances. This is what we experience when we see refugees fleeing a war-torn country on the news, a starving child on a commercial for a charity, or a homeless person sleeping in the subway (if we haven’t had that experience). It drums up a sense of pity or sorrow within us.

Empathy is built on shared experience – it’s feeling WITH people. In order to connect with someone, you make a choice to connect with something inside yourself that knows that feeling. It provides a deeper connection and understanding of what someone is going through.

“I know what it’s like down here. And you’re not alone.” - Brenè Brown

As we journey through life, we collect experiences that shape who we are. Shared experience is what allows us to connect emotionally with people, understand what they’re going through, see ourselves in them.

Essentially, what we tested with Jack’s Story is if it is possible to use the interactive environment of virtual reality to convert sympathy to empathy by exposing those already sympathetic to the issue of childhood poverty to an experience that may deepen their understanding and personal connection to the issue. Allow a deeper understanding of the perspective of the other. And in doing so, mobilize stronger support toward the amelioration of the issue.

To put participants into a more receptive state with the intention of deepening the connection to Jack, facilitators led participants through a child regression.

As participants dove deeper into their minds, they were asked to recall two separate moments in their childhood. First, a time and place where they felt safe and happy. Next, a time and place in their childhood where they felt unsafe and unsecure. In both instances they were asked to imagine what this child’s future could look like.

During the experience, participants moved around Jack’s family’s small, one-bedroom basement apartment as a story unfolded around them. Jack lives with his parents and baby sister. His dad has recently lost his job and is unemployed. His mother is currently on maternity leave. They live in a small one-bedroom basement apartment, after having to leave their home. There is no heat, a small amount of light, and few personal belongings. Like most families living in poverty, Jack and his family deal with food scarcity, unemployment, social isolation, mental health, and socio-economic challenges.

As Jack’s parents fight in the next room, participants interact with objects around them – a tattered soccer ball, a broken toy, an empty soup can – and hear Jack’s thoughts as they hold the item.

After the virtual reality simulation was complete, participants debriefed by sharing their experience and engaged in a curated post-experience information session outlining United Way’s work in childhood poverty and showed how participants can make a significant and measurable impact.

When we ran individuals through the simulation, the results were exciting. Participants completed an online survey after the experience which showed that the experience was successful in sparking empathetic responses: 79% Agree - Strongly Agree that they can understand what Jack is going through, and 64% Agree - Strongly Agree that they can feel Jack's emotions.

“…I was fully immersed. I remember feeling upset and sad when I knocked over the soup can and how he wouldn't have anything to eat.”

“It absolutely hits the objective of generating empathy…”

What does this mean for us?

Virtual Reality has been adopted by other non-profits and humanitarian organizations around the world to increase empathy. An example is Clouds Over Sidra, created by Gabo Arora & Chris Milk - a VR film that follows the 12-year-old Sidra, a Syrian refugee living in The Zaatari Refugee Camp in Jordan.

As virtual reality evolves and becomes more prevalent, experiences like Jack’s Story and Clouds Over Sidra serve as examples of the power this technology has to positively affect social change. Underlying this, is a recognition of the innate power artists and creators have as changemakers.

We are seeing a push toward using these technologies in a socially disruptive way. Unity Technologies, for example, has created an initiative called Unity for Humanity, which uses its platform to celebrate and support the journey of these creators. They offer funding, mentorship, and technical support for social impact projects.

It is heartening to know, that amongst the chaos of a complex world in the grip of exponential technological growth, there is an emerging common language and drive to harness the power of these soon to be omnipresent technologies toward the good of humankind.